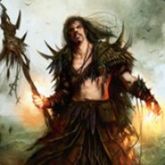 August 2017 in Bug Reports
I was playing an Invasion game, and two of my Bricktrons got stuck. They had the little hourglass symbol next to them, and I couldn't move them or do anything with them. They had been assigned to a construction task with some deconstructing planned.

I decided to try saving and reloading.

Doing this seemed to have fixed their problem, since they were completely normal after. However, an entire row of placed Sentinel Wards was completely lost upon reloading the save. So now this Invasion attempt is pretty much gone, since I had invested so heavily in Sentinel Wards. Oh well. Time to start over.