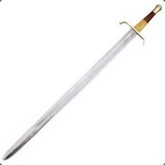 TheRedSwordsman Member
August 2017 edited August 2017 in Stories!
Here is where our story begins, how the Artificer came to be.

There was once an island called the Everlasting Cliffs. This island had a weird element called Brimstone, which caused the beginning of everything we know today.
Brimstone is magical, as we all know. Over billions and billions of years, Brimstone caused the stone around it to turn into the two species that were to inhabit the area. They once were at peace. They had everything they needed. Then, the Bricktrons declared war against the Corruptrons. They succeeded, but the Corruptrons still remained.
Over time, there were more wars. Bricktrons created five primary kits: the Knight, the Archer, the Halberdier, the Arbalist, and the Alchemist. Everyone who didn't use a kit was a Worker. They created the foundation of the Bricktrons home.
There was once a Bricktron named Terriatello. Terriatello was a curious Worker. He also loved to mess around with Brimstone. Because of this, he made many famous creations that we still use today.
His first invention as a young Worker was the Altar. The Altar was a workshop that possessed magical energy through the power of Brimstone. Though Terriatello didn't know what it would be used for yet, he cherished his work. All the other Bricktrons didn't like wasting resources on purposeless things, however.
Still, Terriatello tried to prove them wrong. He put some Brimstone in the Altar and shoved it around. A lot of the time, nothing would happen, but when he did it in the right way, he created a blue crystal. He got an Iron Ingot, put it in the Altar, and it created a weird shaped thing, but when he put the crystal on it, the crystal sat there and floated! He decided to call this a Ward.
After a while, he shoved Brimstone around and created more Wards. He gave each of them a name. The blue one was a Pylon Ward, the orange one was a Lantern Ward, the green one was a Healing Ward, and the purple one was a Capture Ward. Terriatello discovered the purposes for them. The Pylon Ward would power other Wards if a Crystal to power them wasn't nearby. The Lantern Ward created light. The Healing Ward healed other Bricktrons. The Capture Ward didn't need to be powered, and it would turn neutral Crystals over to the Bricktrons.
It was pretty amazing what people could do with these, and Terriatello's fame grew. He even managed to create one more Ward, the Sentinel Ward. It was red, and it shot magic missiles at enemies. It was a one of a kind. It was a great help in defense.
This was all nothing compared to Terriatello's greatest invention. One day, he got super bored of carrying bricks, so he went to the Altar. That was when he came up with a great idea. He wondered what would happen if he mixed a Healing Ward and a Sentinel Ward along with a Pylon Ward to power them. He put them in and shoved them around. Suddenly, a tiny burst of light came from the Altar. It was just a tiny Pylon Ward. At least, he thought. He put it on a staff he made and tried whacking it. Suddenly, a red missile shot out of it! He was even able to control it!. He tried slamming the staff on the ground, and a green circle appeared! He knew this was the work of the Healing Ward. He went up to an injured knight, and he started feeling so much better! He created a suit to go with it and put it on. He held the staff in his hand and knew this was amazing. He called this kit the Artificer. Artificers could heal other Bricktrons or attack Corruptrons. It was so amazing!
He apprenticed a Bricktron named Brimsong. Brimsong was a quick learner. He learned all of Terriatello's knowledge. All about the Altar, the Wards, the Artificer, and everything else! He was the second Artificer.